Anafi is a small Greek island situated on the south eastern side of Cyclades, close to Santorini. Due to its small size and few inhabitants, Anafi island remains a pure island, untouched by mass tourism. It has only one village and numerous crystal beaches around its coastline. Tourism is not organized at all in Anafi Greece and visitors know that in this alternative place they will find few tourist facilities. Ideal for nudists and free-campers, most beaches can be accessed on foot. Chora, the capital village, is constructed on the mountain slopes and offers breathtaking view to the Aegean Sea. Holidays in Anafi offer all the privacy and relaxation you might need.

Anafi is a small and secluded island on the south eastern side of the Cyclades. This is one of the least tourist developed islands of Greece, therefore activities in Anafi are limited. Hiking is the most popular activity on Anafi island and it is actually a necessity sometimes because motor vehicles there are very few. Many visitors also go to Anafi for free camping on the beach. The local municipality has even constructed facilities for free campers, like showers on the beach. The only shops on the island, like mini-markets and groceries, are found in Chora. 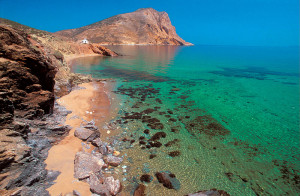 The small island of Anafi is not much developed in tourism, therefore it keeps very low paces in nightlife. Apart from the restaurants in Chora to enjoy a romantic dinner, there are only few cafeterias where you can have a drink. These cafeterias usually close at around midnight. There are no clubs on the island.

Anafi is a small island in Cyclades, located to the east of Santorini. According to mythology, Anafi emerged from the Aegean Sea when the Argonauts prayed to Apollo, the god of music and light, to save them from the angry sea. That is why the Argonauts built a temple dedicated to this god, whose worship was widespread on the island. Remains of this temple can still be found near the Monastery of Panagia Kalamiotissa. It is said that Anafi was first occupied by the Phoenicians and later by the Dorians. Following them, in the 5th century BC, it was conquered by Athens.

Unfortunately no tours were found.

Unfortunately no cruises were found.

Unfortunately no car rentals were found.

Unfortunately no accommodations were found.